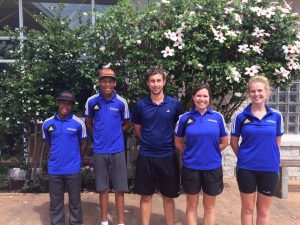 The new year has bought a change in our coaching staff, we sadly had to say goodbye to Dave Bell and Esther Slieker as they returned to their home countries.  But warmly received Daniel De Wet, who is working with us on a part time basis.  Also this year we have been lucky enough to have some coaches with us on a short term basis.  Daniel, was visiting from New Zealand and volunteered for a while and Margret Kuhn before she went abroad.  As well as some of our senior boys from the Academy coming on board as junior coaches, it is great to train these boys that we have already invested in, on the job, so that they can give back to the younger members of the Academy.  (Above in the photo from left to right is Jayson,Brandon,Daniel,Beth and Margret)