On the 12th & 13th of April we held an Easter Holiday Club for our young people from the Academy, aged between 8-16 years old, focusing on the Easter Story. This was an opportunity to get all our young people together from the different communities and also as a reward for the best attendance for the past term. We had a fantastic time with the young people, 8 girls from Macassar and 13 girls from Sir Lowry’s Pass on the Wednesday and all our boys, 15 from Macassar, 12 from Sir Lowry’s Pass and 10 from Lwandle on the Thursday. We started the day with a welcome and after splitting the kids into groups we heard very loud and varied displays of team war cries. The day consisted of team rotations round our 3 stations – Hurdles, Shot Putt & Assorted Games. We chose sports that the young people have little or no exposure to, in order to give them opportunities to try and learn new sports which they may never get the chance to experienc 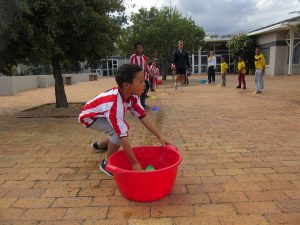 e. Our hope is that all our young people find a sport which they enjoy, so we work to expose them to as much variety as possible. There were lots of kids who were able to try Hurdles and Shot Putt, having never had the opportunity before and who loved being able to learn a new sport. The assorted games were a great team building exercise as well as being a load of fun and allowed our kids a chance to cool down during the wet sponge throwing competition.

The kids left each station with big grins, chatting 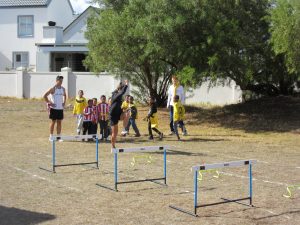 away to each other, mixing amongst themselves between the different communities. The goal of each station was to win a plastic egg for your team which contained a clue for the story of Easter. The teams went through the stations collecting eggs and also collecting points through our MVP System – Most Valued Player. If you team had a player which stood out as valuable to their team, that team received extra points.

Each team needed 6 eggs in their colour, and after lunch, they had the opportunity to find the rest of their eggs in THE BIG EASTER EGG HUNT! Those who had already earnt eggs had a head start with needing to find less eggs, while some teams needed to locate all 6 eggs in the hunt. There was a lot of great communication and determination in these kids to find their eggs the fastest – and thus earning their team more points. After a while, all the eggs were found and it was time to decipher the clues. Coach Beth led the teams through the eggs and through the story of Easter. The end of the day meant prizes and a goodbye.

We are so thankful to all those who were involved in the Holiday Club. We

had an incredible team of helpers and volunteers which made it all possible. We were especially grateful to our 2 English volunteers who were here to help that week and who threw themselves in. We also had 4 young people with us for day 2 from a local school, to do voluntary hours for a project. It was a fantastic 2 days, full of fun, laughter, friendships, food, learning and team work.