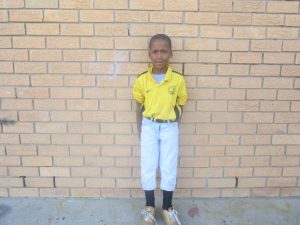 Rowan has been coming to the Academy for two years now. When he first came to the Academy he was very nervous, only wanting to play at the back off the team, afraid to catch the ball and was very shy. In less than a year Rowan grown so much in confidence and trust in his ability’s. He started to play along with the team and now he will go in for tackles and receiving the ball like he owns it. It is incredible to see how far this young boy has come even in the short time he has been with us. He has learnt so much in his rugby but we also see so much growth in his character both on and off the pitch. 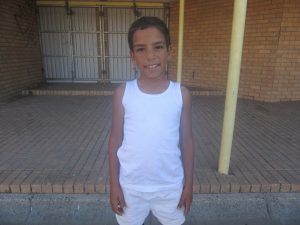 Qeuwynn first came to the Academy 3 years ago, a small boy with very low self confidence. He always kept away from the bigger boys and tried to keep out of the way. He had very little knowledge of Rugby, but over the past 3 years he has learnt more about the game but also perseverance not give up, and he now plays with boys twice his size. Qeuwynn has learnt a lot at the Academy, which he often shares with his friends and gives correction to some of the other boys when they aren’t behaving well. He has a great heart which is so clear to see and it has been great to watch that grow, develop and shine through his character and kindness. After home visits we hear from his mother that he is much better at listening and doing what he is told, but also that he challenges her in her values and views. What an incredible role model this boy is becoming to his peers and even his parents. 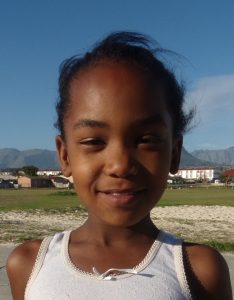 Meshay has only been with us at the Academy since October 2016, but in the short time we have been able to coach her, she has come so far! She is still very young and came to the Academy with no knowledge or skill for Netball. We recently had some new girls join of a similar age to Meshay, and it was clear to see through comparison, how far she has come. She was just like these new girls when she started. Timid, a little frightened of the ball and really struggled to grasp the rules and techniques. Now however, she has a great understanding of the game, how to play and what the rules are. She is much smaller than most of our girls, but despite this she is easily able to play with the older girls, showing great ball skills and good footwork throughout training and matches. She is such a sweet girl who has completely come out of her shell over these past months. She has bought friends along to training and helps them to 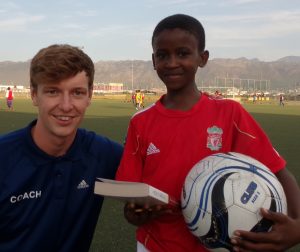 Unathi joined us at the Academy at the begining of the year and when he arrived we quickly realised he was capable at the basics of soccer but that he lacked confidence. Unathi was shy and it was easy for him to hide behind some of the larger characters from the boys. Yet, due to his consistent participation in training and matches a new found confidence can be seen in him. He no longer hide’s but instead will answer questions, help others with translating drills into their language or offer technical feedback to other boys in his group. It has been fantastic to see that through encouragement Unathi has been able to grow his character and show him true self more and more.