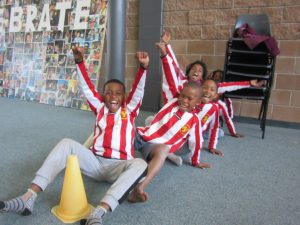 In July we ran our usual 2 day holiday club for the Academy children and young people, this time 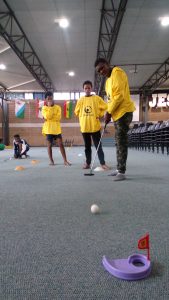 focusing on Awareness. After weeks and weeks of planning – games, sports, story and more – everything finally came together in 2 days of joy, fun and learning.

We focused on the importance of awareness and watchfulness in the 4 games we played: table tennis, hockey, obstacle course (including Golf) and extreme dodgeball. Each station started with some training in the sport before ending in a competition between the teams on the station. Before lunch we added up the scores to see who our for-runner was before Beth lead a short talk on the importance of being aware both in sports and in life, about being watchful to what is happening around us and how we can make a difference in situations through being more aware.

It was time to fuel their bodies with some hearty lunch, so we all went to stuff our faces with spaghetti bolognas on day one and macaroni cheese on day two before some free time where the children and young people could play some soccer, rugby or end ball before our final activity – EXTREME DODGEBALL! 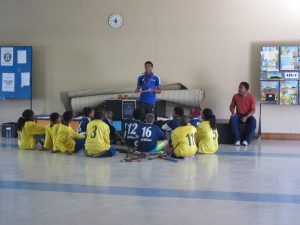 A game Beth had bought with her from England, this game involved each team taking turns batting (a bit like rounder) but in pairs, hitting a soft beach ball with their hand, while the other teams fielded. If the ball was caught, you were out, but if it wasn’t you had to run to the other side of the hall to the safe zone there. If you made it then you earnt 1 point, and if you made it there and back to the start in the same run you earnt your team 2 point. The fielders could get the batters out by hitting them with the ball below the waist. This game caused a outbreak in competitiveness in the teams and was a huge success. It was easy to draw a message of awareness out of this game, with all the players needing to be aware of where the ball was, where the fielders were, where the batters where running and to make sure there were no collisions, everyone had to be aware of everyone else. 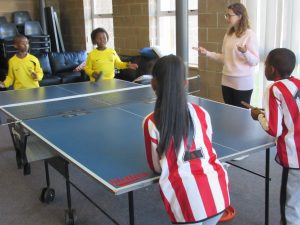 During the day we kept score but also gave out extra points for MVP (Most Valuable Player) in each drill. At the end of each day we added up the final scores and were able to give out t-shirts as prizes to the winning team and wrist bands to all our MVPs. It was a fantastic 2 days and our children and young people went home exhausted, but having had an enormous amount of fun.